I was first introduced to “mind maps” through Tony Buzan’s books in the early nineties, and since then have used them often to quickly outline ideas. I also used them extensively during my Masters degree. I have a friend who has been doing animated mindmaps to outline books and ideas, and I’ve really enjoyed those too. So, when I first heard about the idea of “sketchnoting” (I believe through Sacha Chau’s blog), it was an easy sell. A month or two ago, I purchased Mike Rohde’s Sketchnote Handbook (which I reviewed on Goodreads), and just in the last week I’ve finally had a chance to put pen to paper to sketchnote a couple of my favourite books of 2012.

The first of those was Peter Drucker’s The Effective Executive (my Goodreads review). Here is my “sketchnote” for the book: 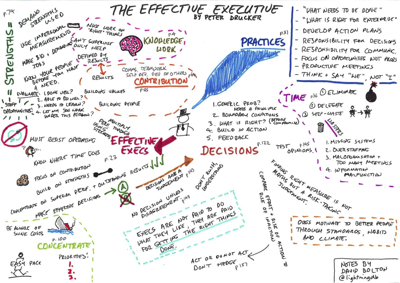 I’m mostly pleased with it. It is a bit more dynamic and visual than my mindmaps have been in the past. I tried to draw a few things using simple shapes, as Mike recommends, and they sort of worked. I was also concerned about “managing space” on the page, but this wasn’t too bad. With a mind map, since everything is radial, white space and space management wasn’t so much of an issue. And it turns out I was able to capture the major thrusts of the book without running out of space, however I could see this being an issue with some sorts of books.

I’ll have some more sketchnotes, and perhaps some of my old mindmaps for contrast, to post in the coming days.